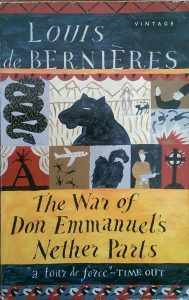 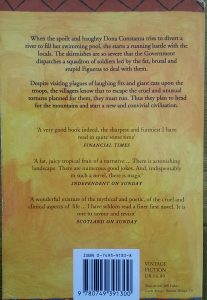 The War of Don Emmanuel’s Nether Parts by Louis de Berniere is the first book in a trilogy written by Louis de Berniere before he wrote his bestselling and well know novel Captain Corelli’s Mandolin. Simon told me to read The War of Don Emmanuel’s Nether Parts and I met Simon in 1999, so it had been available for 8 years. I was instantly hooked. It was THE best piece of advice Simon ever gave me, or more likely, the only one I ever listened too. The genre is magic realism and this book delivers that en force. Set somewhere in the South American jungle, the characters and plot are exquisitely portrayed and developed; stupidity, magic, love and passion abound. Louis’ writing is superb, poetic at times, yet he also fearlessly visits those crueller and cringingly inevitable places. You will laugh but you will cry too. Not for the fainthearted.

LOOKING FOR SOMETHING TO READ